We do not have to go far from Warsaw to find an original high-level tourist attraction. Viking village Jomsborg is located close to the center of the capital, access here is good actually from each part. This  a good advantage, especially when we choose to visit it with a whole family. We also have a large and free parking on site.

Several times a year in the village of Vikings, special major events are organized. It is especially worth visiting this place during them. They then have a place of show and duels of viking soldiers. There are also other attractions. 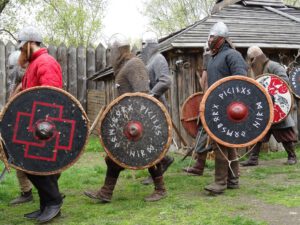 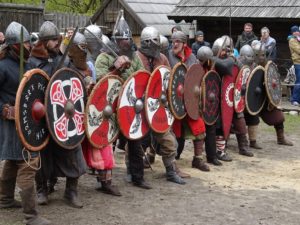 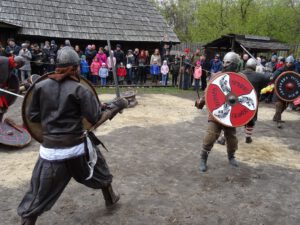 Children can take part in a mini tournament, with rewards. Under the eye of the head of the village, they compete like a real Vikings. You can also check your possibilities for example in a axe throw. 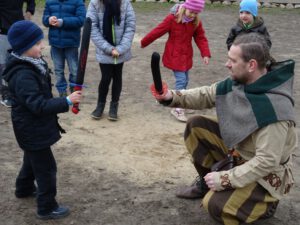 A real great attaction is bird shows, particularly interesting are owls. It is worth following when a team of specialists from  Pomerania is going to visit Vikings village. They have several different kind of birds, they will also be talking about them in details. It happens that the team also includes  Aquila Falconery. Falcon and owls from this team we will also meet in another amusement park which is close to Warsaw – Frajdalandia. 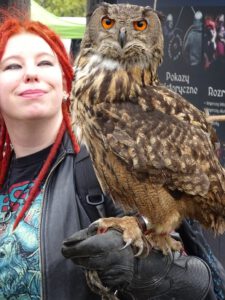 It is difficult to calculate all attractions waiting for us in the village  during special events. You can enumerate herbs, artifacts or weaving shows, it happens that there is also a musical team playing music from old centuries.

In addition to large events, the Vikings often open the village during ordinary weekends. There is less attack then, but does not mean and it is not worth falling here. We will not meet large crowds and we can listen to the Viking traditions with peace.

If we were interested in the history of Vikings, you can even try to enter the Viking team. They constantly lead recruitment, and welcome warmly of new recructs.

From time to time in the village of Vikings there is also a real show. More specifically, this is a fire show. Maximus Heratikus a friend of Warsaw  Vikingss presents its play skills with fire.

It is a really big attraction, which is why it is worth waiting for this event in a special way. You may have this autumn to see Maximus in the village of Jomsborg.

Vikings were also in the vicinity of Warsaw

Not a lot of  people know that north of Warsaw  are still alive legends about the arrival of the Vikings. One of the village at Vistula is called Mochty Smok. Smok means dragon. The dragon in her name was just a relationship with the Vikings who had to leave the element / dragon of their boat here.

On the northern Mazovia region, there are also ancient cementaries associated with Vikings.
Stories best to get to know Live, the village of Jomsborg gives us this opportunity.

It is worth following the internet site of village and FB  so that you do not lose an interesting historical event. Regularly in the second half of the year, Picnic is organized for the „end of the summer” and the autumn of traditional „all saints day” called Dziady in slavic religion.

List of other touristic attractions and events to visit around Warsaw on our english site version.

Places to swim around Warsaw, lakes and beaches on the rivers near Warsaw

Castles near Warsaw – Czersk , Liw, Inowłódz, Ciechanów What to choose?